Living in the Pacific Northwest means lots and lots of grey during the winter...so vibrant colors call to me. (Not in a gentle beckoning sort of way, it's more like "Hey, you! Come here now!)

Orange? Love it. Red? Gotta have it. Bright cobalt blue? I'm all over that action, baby.

One of my favorite color combos is lime green and ocean blue - these colors are juicy and cheerful, without the intense energy that fiery colors like orange and red bring to the table. Lime green packs a little punch and creates interest, while ocean blue provides the perfect counterpoint.

I created the following earrings with this color scheme in mind. They feature my own lime green lampwork beads, sterling silver, freshwater pearls in lime green and ocean blue, and Swarovski crystals in various shades of blue and green. The earrings are very lightweight and dangly, and sparkle in the light as you move. Enjoy! 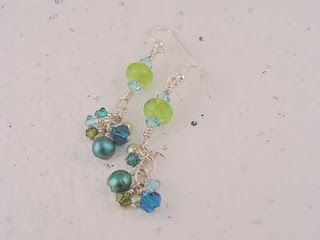 Posted by Christine Hansen at 4:19 PM No comments:

I used my freedom from the kitchen today to list some of my earrings and lampwork beads in my ArtFire shop. I have about a dozen pairs of lampwork and sterling silver earrings priced at $18, including shipping. 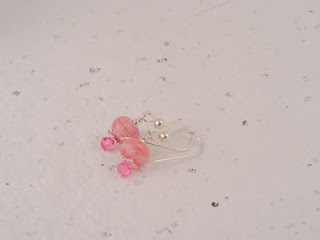 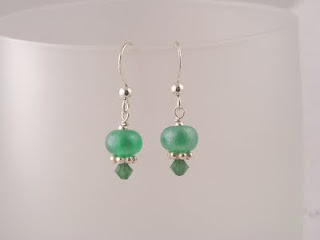 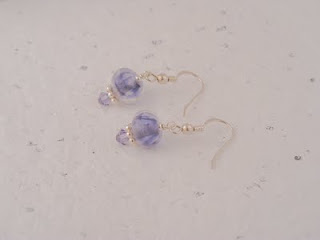 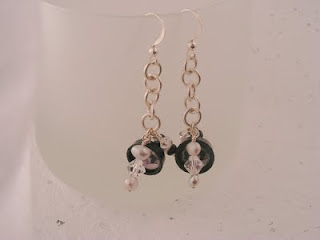 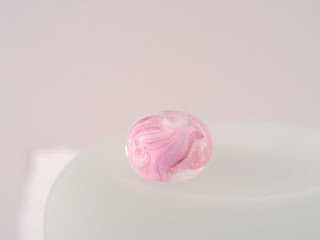 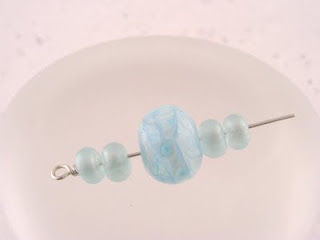 Posted by Christine Hansen at 5:39 PM No comments: 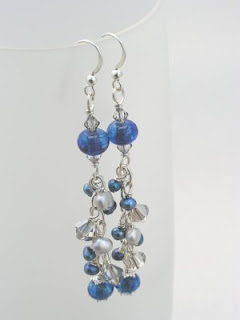 I'm thrilled to announce my latest class, Silver Cascade Earrings. This is one of my favorite designs EVER, because they're so lightweight and pretty.

These flirty mixed media earrings feature freshwater pearls, Swarovski bicones, lampwork beads and sterling silver - all of which add up to lightweight and comfortable earrings. The bright colors and flexible movement make them fun to wear as well!

Here's the progress so far. Jerry found a couple of spots of water damage under the old roof, so I suppose it's a good thing we're doing this project now and not trying to make it through another rainy season. (eeek!) He just informed me that I'll need to go back out later and take more pics, because it'll look different. You GO guy!

In this picture, Jerry's priming the end sheets that go on the rafters. He's replacing all of them on the whole house. 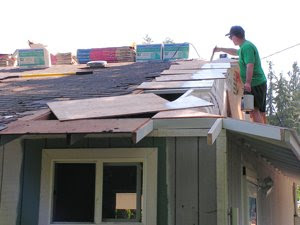 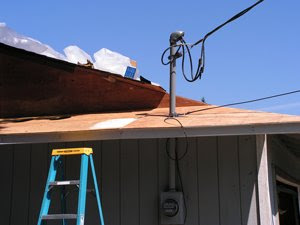 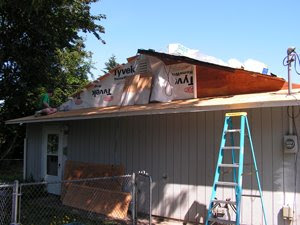 This picture shows one of the new shingles (and Jerry's left toe). It's CertainTeed's premium 50-year architectural shingle in Heather. We think it'll look great, especially after we paint the house a light mossy green. 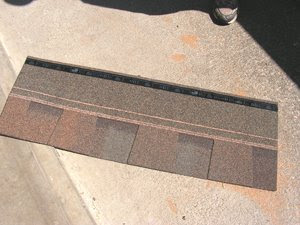 Jerry shows off his complex cut - our house doesn't have a regular A-frame roof - it's got hips and angles and eaves...all the little things that make doing your own roof that much more challenging...and special! 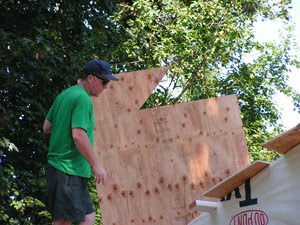 The big project this year is replacing the roof on our house. We had 5 (or was it 6?) roofing companies out to bid the job, and the lowest bid was about $6K...way too rich for our blood so Jerry, consumate DIY guy that he is, decided to do it himself. (He says he wants the "I did my own roof" badge, LOL.)

I've been providing administrative backup for him - among other things, I arranged for the permit, found 50-year shingles at a steep discount, AND thoroughly researched our limited old-roof-disposal-options. (After numerous phone calls and web searching, I found that in Thurston County, the only option is to haul those old shingles to the landfill. Argh!)

Jerry's got a to-do list a mile long for this project, and truly, the project started a long time ago. The first thing on the list was to replace the rotted wood posts on the front of the house - they were "floating" on top of the concrete base. As a result, that corner of the roof sank a bit and needed to be jacked back up to where it should be. Here's a before shot showing the wood posts, sagging corner, and on the left side just behind the house, you can see the top of the doomed cedar tree as well. 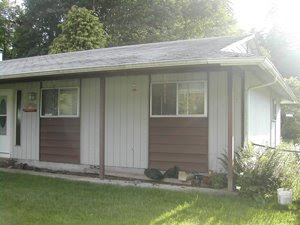 Jerry took a welding class at South Puget Sound Community College and made some heavy duty steel posts; he and our neighbor David installed the posts with fresh concrete and now the corner no longer sags. 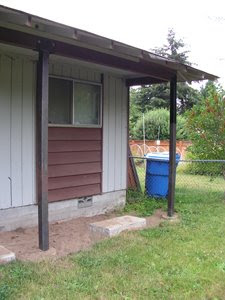 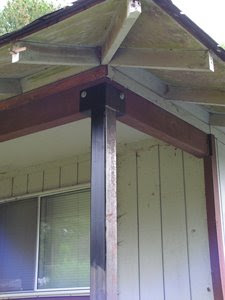 New sturdy posts - as you can see - they are not going anywhere!

The next thing Jerry did was remove the cedar tree in our backyard. We both hated to see it go, but it was about 10 feet from the house and in the Northwest, when trees are that close to houses, it invites moss to grow on one's roof. Moss degrades the roof, and in a rainy climate such as ours, a degraded roof is not good.

The last big thing to tackle before the actual roof replacement was to fix the eave on the garage side of the house - a previous tenant had sheared off the eave, possibly to park a motor home. 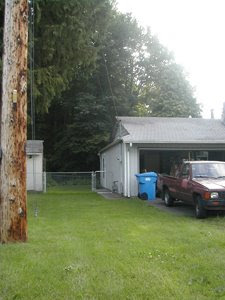 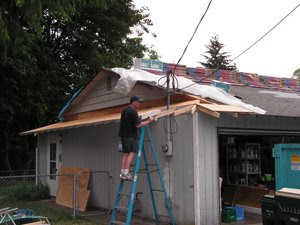 Before pic of the "eave" and tree, and after pic of eave and no tree.
Stay tuned for more exciting updates on this project!
Posted by Christine Hansen at 6:44 PM 4 comments:

I've been a good mom this school year. I've chaperoned almost all, if not every single one, of the kids' field trips. Of course, that's because I'm lucky enough to be a stay-at-home/work-at-home mom, and because I love field trips! So yesterday being the next-to-last-day-of-the-school-year, I decided it was time for a field trip for Mama.

The third Thursday of the month is free admission day at the Tacoma Art Museum, and I'm a cheapskate, so I headed up to peek at one of TAM's newest exhibits, Ornament as Art: Avant-Garde Jewelry from the Helen Williams Drutt Collection. The exhibit runs until September 13, 2009. I'm sure glad I did, and I know I'll be going back before it ends.

The only bummer, as you've probably figured out already, is that the museum does not allow cameras of any sort. I saw a guy with a photo press pass and kiddingly asked him if he could take some pics with my camera for me...he looked kind of rattled until I told him I wasn't really going to hold him to it - I wouldn't want him to lose his press pass on my account!

It was amazing to see all of the different pieces of jewelry, which were presented not as jewelry, but as art.

Earrings were not included in the exhibit because, according to the docent I spoke with, the intent of the exhibit was to display jewelry that stands on its own and makes a statement. Earrings don't make much of a statement unless they're worn. OK, I guess I can accept that. I don't have to like it, but I can accept it.

So I saw bracelets and rings and collars and sleeves and pendants and brooches. There was a gold index finger and a gold nose, both by Gerd Rothman. No kidding. I guess you could use Silly Putty to adhere the nose to your face or something. You'd be definitely making a statement wearing that next time you go grocery shopping. And hey, what about that gold finger? (cue James Bond music...)

Mixed media pieces by the truckload...thank goodness I'm not the only one enchanted with putting odd things together!

While everything I saw was amazing and wonderful, I think my very most favorite pieces were the collaborative mixed media narrative brooches using found objects and many different techniques, created by Robin Kranitzky & Kim Overstreet. Donald Paul Tompkins' medals commemorating the lives of Janis Joplin, Jackson Pollock, and Minnesota Fats were also some of my faves. I couldn't resist adding Bernhard Schobinger's ring to my favorites list, Lipstick for Neanderthal Woman, made using copper, carborundum, silver and gold. The sparkly carborundum sticks up out of the ring, like lipstick emerging from its case. Wish I could find you a picture.

Yes, there were gold and silver and gemstones galore...but I saw a huge number of diverse materials used as well, which reminds me of how Faberge' and his colleagues worked - they treated every material used, even the mundane, as precious and finished it beautifully. Here's a quick list of some of the materials used:

If you're in the area, I encourage you to check out the exhibit before it ends September 13, 2009...you won't regret it!

Tomorrow is the last day of the 2008-2009 school year for my kids, and since I've been such a great mom...making lunches, driving those who missed the bus to school, and chaperoning many field trips...I decided to take myself on a field trip today, to the Tacoma Art Museum. They've got a new exhibit I can't wait to see, Ornament as Art: Avant-Garde Jewelry from the Helen Williams Drutt Collection. This is "the first major exhibit to explore contemporary jewelry as a global art form," according to the Museum's site. I'll report back with all the exciting discoveries I make.
Posted by Christine Hansen at 9:05 AM No comments:

This is exactly the kind of thing that makes me proud to be a flameworking artist - by and large, the art glass community is filled with caring people who want to make a positive impact on our world.

The 2009 event will take place on July 17 (Denver) & July 18 (Golden). If you're in the area, stop by and take a look - you won't be sorry! The glass artists involved will work together to create a large-scale collaborative project; event proceeds will benefit Learning Landscapes, a University of Colorado Denver program that partners with Denver Public Schools to transform run-down elementary school playgrounds into multi-use parks.

Goals of The Colorado Project:

Posted by Christine Hansen at 10:46 AM No comments:

My entry for the February Art Bead Scene Monthly Challenge 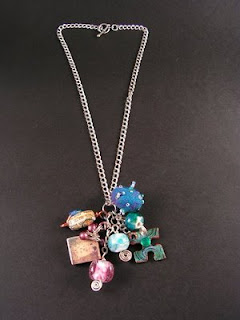 I finally worked up the courage to enter the monthly challenge presented by the folks over at Art Bead Scene - my entry is this artcharm cluster pendant. 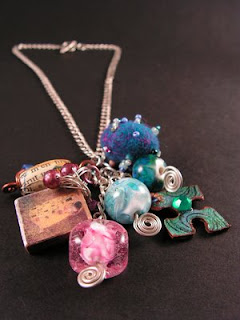 I created this artcharm cluster pendant with four of my handmade artcharms and three of my lampwork beads from my Fractal Swirl series. The four artcharms include a bead-embroidered felted wool bead artcharm, an altered puzzle piece artcharm, a collaged and wire-wrapped wooden bead charm, and an altered Scrabble tile with a tiny version of Klimt's "The Kiss" on one side, and wrapped with sterling silver wire, faceted pearls, and a big sparkly Czech fire polished crystal. 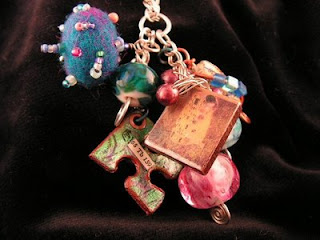 So what about you? 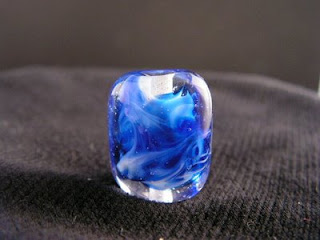 Fractal Swirl bead in cobalt blue
I'm finding myself struggling to maintain an optimistic outlook despite all the negative energy currently roiling about.
To have a little fun, I've decided that I will participate in the International Society of Glass Beadmakers (ISGB) Release-A-Bead Project. I'm going to take a few of my beads and release them into the world for unsuspecting (and highly deserving) people to find. I'm even thinking of sending a stash of beads to my brother, who travels frequently for his job - Matt can distribute my beads and be part of the fun too, even though he uses his torch for welding, not glass beadmaking. :)
What about you? How can you manifest even a small amount of positive energy? What fun things can you do to bring a smile to your face or someone else's? Leave your ideas in the comments section for a chance to win one of my Fractal Swirl beads; on February 27, 2009, a winner will be selected via a random drawing from all comments left regarding this post.
Posted by Christine Hansen at 10:29 AM No comments:

Christine Hansen
I'm Chris and married to the love of my life, Jerry. I'm a stay-at-home/work-at-home mom to our kids Em and Arch, and our fur-babies Sam and Rufus. My favorite creative activity is melting glass, but I also enjoy making mixed media art charms and jewelry, cooking, and freelance writing. 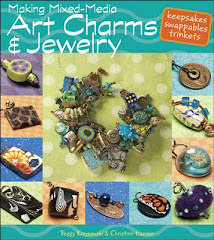 This is the book Peg Krzyzewski and I wrote on how to make art charms!